Before a scanned map can be displayed in the correct location, it needs to be calibrated (geo-referenced). This process involves specifying the location of two known points on the map. Once the correct geographic coordinates are known for these points (called Calibration Points), ExpertGPS can calculate the coordinates of every other point on the map.

Your map must meet the following requirements:

Before you can use your map in ExpertGPS, it must be added to the Map Library and calibrated.

To add a new map to the Scanned Map Library, click Add and Calibrate a New Scanned Map on the Map menu, under Scanned Paper Maps and Digital Charts.

The Open Scanned Map dialog will appear. Select a JPEG, TIFF, PNG, or Bitmap image of your map. 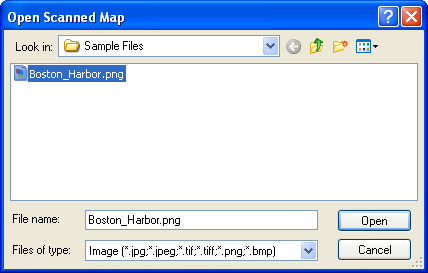 In the Edit Scanned Map dialog, enter a descriptive name for your map, and specify the projection information located on the collar of your map. If your scanned map came with a calibration file (worldfile or map calibration file), it will automatically be detected and used. Otherwise, you will need to manually calibrate the map so that your GPS data appears correctly on it. 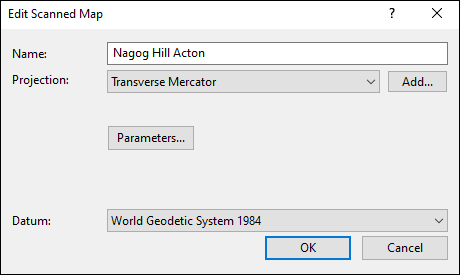 Name
Enter a name for this map.
Projection
Select the projection that this map uses. This information should be printed on the margin of the map.

Once you've named your map and selected a projection, you can skip ahead to calibrating your scanned map.

In order for your scanned map to display correctly, ExpertGPS needs to know the details of the projection used when the map was printed. This information should be printed in the margin or a corner of your map. 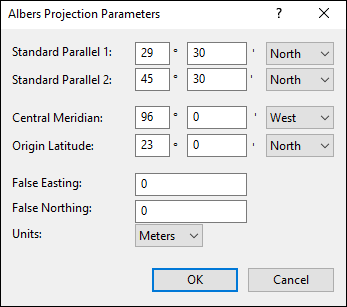 Enter the latitude of the two standard parallels, in degrees and decimal minutes.

Enter the longitude of the central meridian. This is the only line of longitude on the map that is vertical. All other meridians are at an angle.

Enter the latitude of the natural origin of the map.

Enter the false easting used by this projection.

Enter the false northing used by this projection.

Enter the scale factor at the natural origin of the map.

Once you have selected a new scanned map and specified its name and projection in the Edit Scanned Map dialog, the uncalibrated map will appear in the Map window in ExpertGPS. Because the map is not yet calibrated, it will appear in the wrong location, relative to the GPS data in the file. You will now add calibration points to the map, which will "anchor" a specific landmark on the map to its correct geographic coordinates. ExpertGPS needs two calibration points to properly fit your scanned map to its correct location on the Earth.

To begin calibrating the map, do one of the following:

There are three ways to create a calibration point:

To create a calibration point at a grid line intersection, click with the Calibration Point Tool over a point on the map where you know the correct coordinates.

The Edit Calibration Point dialog will appear. Enter the coordinates, and click OK.

Setting a calibration point by selecting a waypoint

To use a waypoint as a calibration point, hold down the Shift key and click with the Calibration Point Tool over a feature on the map which corresponds to a waypoint in the file. (a mountain summit, the trailhead parking lot)
The Select Waypoint dialog will appear. Select the corresponding waypoint, and click OK. 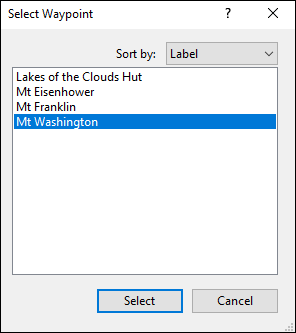 Setting a calibration point by dragging GPS data into location

To set the second calibration point, do one of the following:

The cursor will change to

When you are finished calibrating a scanned map, do one of the following:

The Keep Scanned Map Calibration Changes dialog appears. If you are not satisfied with the calibration point changes you just made, you have the option to discard them. 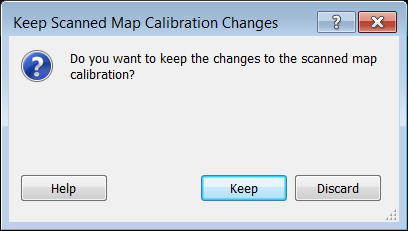 Your scanned map is now calibrated and ready for use. The next time you want to view GPS data over this map, click Show Scanned Map on the Map menu.