Convert any coordinate format or datum with ExpertGPS

ExpertGPS isn't just a mapping tool and a GPS data manager, it's a powerful coordinate converter that can instantly convert between any coordinate format or datum. Whether you need to convert lat/lon coordinates to UTM or US state plane coordinates, convert NAD27 data to NAD83 or WGS84 datum, or reproject shapefile data to match the native projection of your GIS imagery or layers, ExpertGPS can accomplish the task - quickly, easily, and accurately.

The Home Edition of ExpertGPS supports dozens of geographic coordinate formats, and dozens of datums. ExpertGPS Pro was designed for professional users who work with GIS shapefiles and CAD DXF drawings, or who need to convert US State Plane Coordinates.


ExpertGPS converts to and from any coordinate format or grid:


ExpertGPS converts to and from any GPS or map datum:


How to Convert Coordinates using ExpertGPS 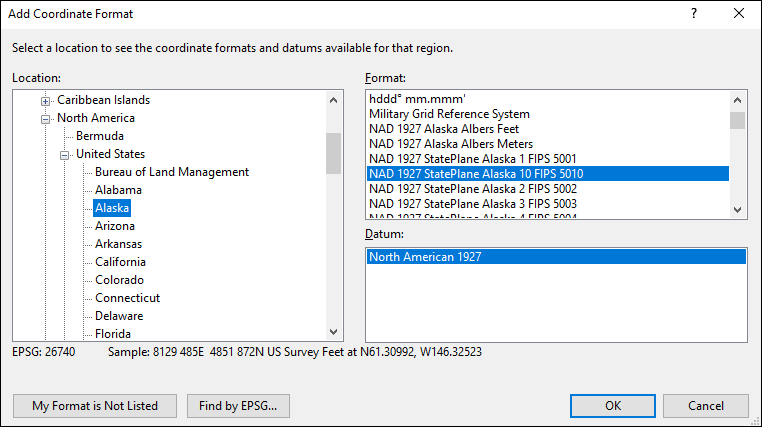 Step 2: Add or import your data

You can add waypoints by hand, draw waypoints or tracks on the map, receive data from your GPS, or import it into ExpertGPS from KML, CSV, a shapefile, CAD drawing, or other mapping format.

As soon as you switch to your output coordinate format by selecting it from the My Coordinate Formats list, ExpertGPS will reproject all of your data to the new format and datum. Your data is converted, and ready for use. You can export it to another mapping, CAD, or GIS program, or copy and paste it into Excel.

Three easy steps, and your coordinates have been converted

There are four main types of coordinate formats used throughout the world today: lat/lon, UTM, US State Plane, and National Grids.

Universal Transverse Mercator (UTM) coordinates are used worldwide. Unlike lat/lon, which is a spherical coordinate system based on angles, UTM, state plane, and national grid coordinates are rectangular grid systems where coordinates are expressed as Northings and Eastings from a fixed reference point. Rectangular grids make it much easier to calculate distances and to plot locations on a rectangular map. UTM coordinates look like this: 2346212N, 12343523E, 18T. The first value is the Northing. The second is the Easting. The third value (always a number between 1 and 60 followed by a single letter) is the UTM zone identifier. If your data is in UTM coordinates, it is very likely in NAD27 datum or WGS84 datum (see below). The vast majority of UTM data is expressed in meters. If you are using UTM data collected prior to 1983 by a US state entity, there's a chance that it uses US Survey Feet rather than meters as the base unit. ExpertGPS Pro provides an option for UTM coordinates in feet.

Almost all of the data available from US state government Web sites is expressed in the US State Plane Coordinate System. US SPCS coordinates have two values, a Northing and an Easting. Some US states have only a single SPCS zone. Other states have a handful, broken down by county. You'll need to know which zone is in use, and select the correct one in ExpertGPS Pro. This Web page lists the counties in every US state, and the appropriate SPCS zone to use:
Converting and Using US State Plane Coordinates with ExpertGPS Pro

Outside of the United States, many countries have their own National Grid coordinate systems. Many of these use the same Northing, Easting format described above. ExpertGPS lists the national grids for each country in the Add Coordinate Format dialog.

For other areas of the world, ExpertGPS will display the datums used in that region. Select the correct datum from the list.

You can add many different coordinate formats to ExpertGPS, and switch between them at any time to enter data or convert data to another format. ExpertGPS Pro users should keep in mind that the currently-active coordinate format is used whenever you import and export data.

Help with Coordinate and Datum Conversion

For more information on datums and coordinate formats in ExpertGPS, visit these Web pages: