I am doing a behavioral study on a species of bird that has communal display sites called leks. I have set up a 10 meter grid of stakes across a lek, which I use to get x and y coordinates for marked birds on the lek throughout the morning. I have GPS coordinates for each of the stakes and would like to translate the ‘fake’ coordinates of my grid into real lat and long coordinates. Can you recommend the best way to do that? 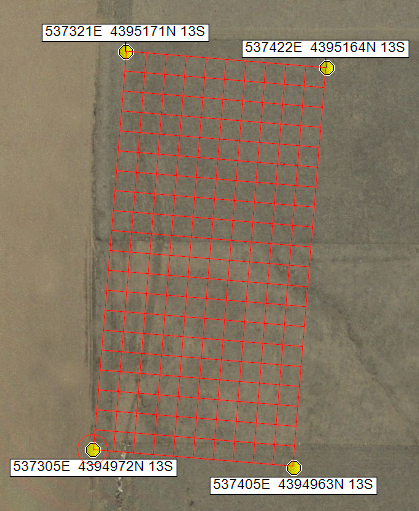 Since you’re using a sampling grid with 10 meter intervals, the first thing you should do is adopt a mapping coordinate system that uses meters as well – UTM. Latitude and longitude are great for plotting spherical data, but for any type of X,Y data, you should switch to a metric grid system. You could use California State Plane coordinates, but UTM is probably an easier choice, and you can set your GPS to display UTM coordinates.

Do the same thing to solve for E at this point. Then consider the opposite point, where y is zero, and x is 100 meters. Use the same technique to solve for A and D.

Converting your x,y grid to UTM in Excel

Once you’ve solved for A, B, C, D, E, and F, you’re ready to convert your x,y data into UTM coordinates. Excel or another spreadsheet program is an easy way to do this. You’ve got your x,y data in two columns. Create two more columns, Easting and Northing. Create a formula for the values in Easting using the equation Easting = Ax + By + C. Same thing for Northing.

Now you’re finally ready to map your data. Excel is applying the two formulae to convert x,y data to UTM, using the six constants (ABCDEF) you calculated. Select your data from Excel, making sure you’ve got the Easting and Northing values as well as the name or label for each data point. Paste this into the Waypoint List in ExpertGPS. Select UTM, WGS84 as your coordinate format (click Add if this format doesn’t appear), and be sure to specify that your coordinates are in two columns (Easting and Northing). Enter the UTM zone (it’s 13 in the example above). On the next screen, you’ll tell ExpertGPS which columns of Excel data contain the Easting and Northing. Once you’ve done this, ExpertGPS will map your data, and you should see your sampled data points appear on the map right where they should be.

That’s probably more math than you want to think about, but the good news is you only have to do it once, and then let the computer do the rest. Those two equations are at the heart of all the mapping features in ExpertGPS – every time you zoom in or scale the map or even move the mouse, ExpertGPS is converting back and forth between the arbitrary x,y coordinate system of your computer monitor and the UTM geographic coordinate system. If you run into trouble, I’m happy to help. Send me the data you’re using in spreadsheet format, as well as the coordinates of the four corners of your sample grid, as well as its dimensions.

See that red rectangular grid in the example above? That’s the Grid Builder tool in ExpertGPS, superimposing a 10-meter sampling grid over the map. The next time you’re setting up a sampling grid using GPS and a map, this tool might save you some time.