The District is considering the purchase of a new GEOTIFF aerial image of the district boundaries for mapping of the infrastructure…the consultant we have been in contact with is advising us to purchase the image in this format for its exceptional horizontal accuracy.

My question to you is does ExpertGPS software support the beforementioned format and or if there is a better format to employ in your opinion.

As a backup thought I have requested we receive the image in various formats to make sure all of our software would be compatible with it….

Last but not least…when importing an image to ExpertGPS what format would yield the absolute best accuracy we could hope for?

How to use GeoTIFF imagery in ExpertGPS? 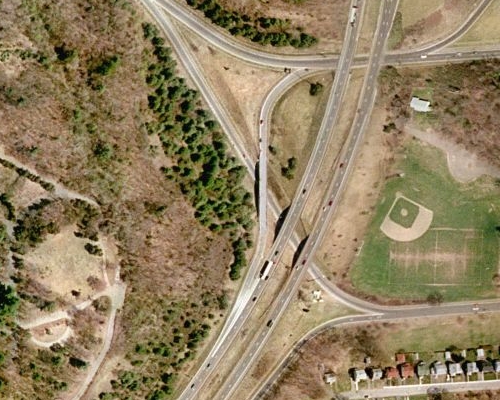 ExpertGPS doesn’t have the ability to read the projection and georeferencing data out of a GeoTIFF at this time, although it’s high on my list of to-do features for GIS users. ExpertGPS will treat it as an uncalibrated TIFF, meaning you’ll have to do the calibration by hand.

It should be relatively painless for the consultant or the imagery provider to also provide a .tfw calibration file with the GeoTIFF – this would be standard if they were providing imagery for use in ArcGIS, so they should be used to it. If they don’t, there are free programs to extract a .tfw from the GeoTIFF.

The accuracy you get in ExpertGPS depends on the quality of the ortho-rectification done by the imagery provider and the correctness of the calibration points (tie points) given in the GeoTIFF or .tfw worldfile. Overhead imagery needs to be ortho-rectified by the imagery provider to remove the distortion caused by the aerial camera not pointing straight down when the photo is taken. They will also add the georeferencing data, the calibration points that allow ExpertGPS to determine the latitude and longitude of every pixel on the image. Your contract with the imagery provider should specify the level of accuracy to expect across the entire image.

Orthoimages are large files, and you may receive a file that has been compressed to reduce its file size. One drawback of image compression, especially the wavelet compression used by MrSID imagery, is that it can produce ringing artifacts around the edges of features. This can make it difficult to precisely locate features on the map, since edges may spread out over several pixels. Ask for an uncompressed or lossless image in addition to any lossy, compressed images they provide.