Eugenijus K. needs help calibrating a map of Lithuania, and overlaying a grid in Lietuvos Koordinaciu Sistema (LKS94), the Lithuanian national coordinate system. Here’s how to do it using ExpertGPS: 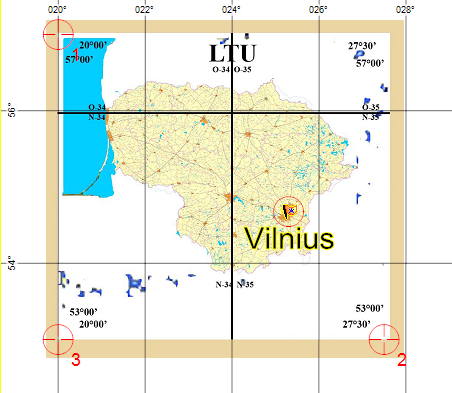 Looking at this map of Lithuania, I can tell that it uses an equirectangular (lat/lon) projection, rather than the Lithuanian Transverse Mercator grid (LKS94). This is because the top left and bottom left corners have the same longitude (20 degrees East), and the top right and bottom right corners are the same as well (27 degrees, 30 minutes East longitude).

To get started, I created a waypoint and recented the Quick Map view in ExpertGPS on Vilnius, Lithuania. I always like to start calibrating a map with some data from the location the map covers. I did a search on Bing.com and quickly found the latitude and longitude of Vilnius, and created a waypoint with those coordinates.

To add the map to ExpertGPS, I clicked Open Scanned Map Library on the Map menu, and then clicked Add. I selected the .jpg file with the map image, and then entered the name of the map, and the projection it uses (Equirectangular). 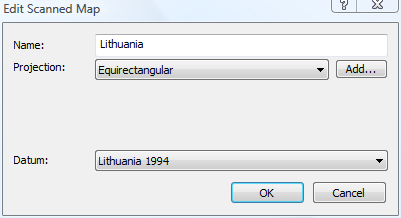 I used three calibration points to calibrate this map. I always try to place the first point in the upper left corner, in this case, at 57 degrees North, 20 degrees West. I placed the second calibration point in the opposite corner, at 53N, 27 deg, 30 min W. Two points are usually enough to properly calibrate a map, and as soon as I added the second point, my waypoint for Vilnius appeared at the correct location on the map. If a third calibration point is required, I try to pick one of the remaining corners, in this case, the lower left one.

To add the Lithunia LKS 1994 grid, I followed these instructions for adding a new coordinate format to ExpertGPS, and selected the LKS grid as shown below. 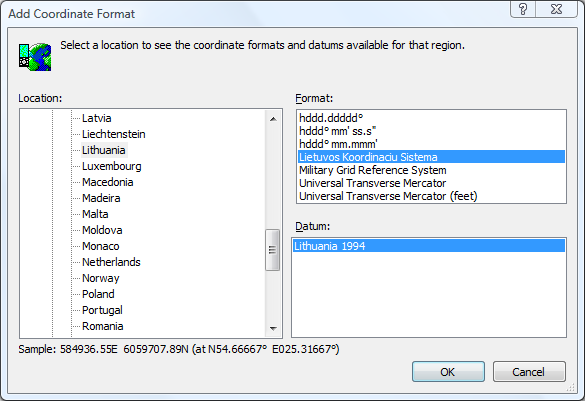 As soon as I switched to this coordinate format, the grid lines in ExpertGPS switched from showing latitude and longitude to showing eastings and northings in Lithuania’s national grid. As you can see in the image below, the grid is centered on 24 degrees East longitude, which runs directly through the center of the country. Because the underlying map is still using an equirectangular projection, the grid lines to the left of the central meridian (24E) curve one direction, and the lines on the right curve in the opposite direction. 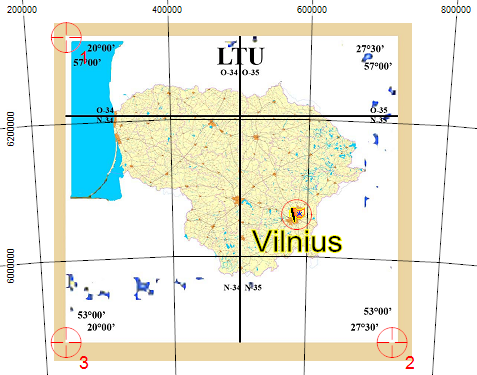