You're About to Unleash the Full Potential of Your Garmin fenix! 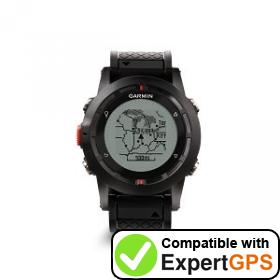 ExpertGPS is GPS map software for your Windows computer, tablet, or laptop. ExpertGPS makes it easy to transfer waypoints, routes, and tracks, as well as GPS, GIS, and CAD data, to and from your Garmin fenix.

ExpertGPS Home is an affordable outdoor trip planner at only $74.95. ExpertGPS Pro contains all of the professional mapping features of high-end CAD and GIS packages, but without the steep learning curve and at a fraction of the price (now only $249.95).

Thousands of businesses and GPS users depend on ExpertGPS mapping software to upload and download Garmin fenix waypoints, routes, and tracks, make maps of their GPS data over seamless USGS topo maps and aerial photos, and convert and transfer Garmin fenix data to and from Excel, Google Earth, ArcGIS, and AutoCAD. We've collected dozens of tips and tricks designed to save you time and money when mapping with your Garmin fenix.

Download ExpertGPS
Download now and start your free trial of ExpertGPS 7.01
New features were added to ExpertGPS on January 6, 2020
ExpertGPS runs on Windows 10, 8.1, and 7.

Download your Garmin fenix waypoints, routes, and tracks to your computer

ExpertGPS can transfer Garmin fenix waypoints, routes, and tracks through your computer's USB port. It only takes a second or two to download all of the data from your Garmin using ExpertGPS.

Transfer data back to your Garmin fenix with a single click. Upload waypoints, routes, and tracks to your GPS and print a matching map out to take with you into the field. ExpertGPS even lets you upload Excel, Google Earth, CAD, and GIS data to your Garmin fenix!

Your Garmin fenix has limited storage space for waypoints, routes, and tracks. Once you reach that limit, your GPS can't hold any more data. Smart ExpertGPS users have figured out how to eke out every last bit of memory space on their Garmin GPS receivers. Before each outdoor adventure or visit to a project site, they use ExpertGPS to back up the contents of their GPS, and then clear the GPS data memory. They can then download as much data as possible onto their GPS (leaving some room for GPS data collection out in the field). When they get back, they use ExpertGPS to upload all of their Garmin waypoints, routes, and tracks onto their computer and save it. Once they've backed up the new data from their GPS, they can clear the memory again, keeping their GPS ready for their next trip.

Backup your fenix waypoints, routes, and tracks by using ExpertGPS to transfer them to your laptop or desktop computer. Now you've got a safe back-up of all of the important data on your fenix, and use ExpertGPS to find and create new waypoints, routes, and tracks to download to your Garmin GPS. Before you update your Garmin fenix firmware or install a custom basemap, Garmin recommends that you backup all of your GPS data. ExpertGPS gives you the peace-of-mind that your Garmin fenix data is always safe.

View your Garmin fenix waypoints, routes, and tracks over USGS topo maps and aerial photos. These are actual 1:24000 scale topographic maps from the US Geological Survey, giving you much more terrain detail than the maps that came with your Garmin.

Why waste time entering new waypoints on the tiny screen of your Garmin fenix? ExpertGPS can do it 5x faster! Use the New Waypoint dialog in ExpertGPS to create new waypoints and POI listings for your Garmin GPS. As you type, ExpertGPS automatically suggests the best possible name for this waypoint on your GPS.


Calculating Area with your Garmin fenix

ExpertGPS lets you get the most out of the waypoints on your Garmin fenix by making it easy to assign the best symbol and to give each waypoint a long, meaningful name (using a real keyboard, not the little controls on your GPS). Think about it:

GPS coordinates are easy to mis-type. Using the Waypoint Tool in ExpertGPS to create new waypoints reduces the chances of making a mistake when manually entering coordinates on your GPS. ExpertGPS takes care of all of the coordinate conversion and datum shifts when communicating with your Garmin fenix, further reducing errors.

Tracklog Tricks for your Garmin fenix

Trace new trails and roads to send to your Garmin fenix

Did you know you could trace roads, trails, and other features on the maps in ExpertGPS, and send them directly to your Garmin fenix? This is a quick and easy way to keep you on-track when out in the field.

Poor GPS satellite reception can cause all sorts of errors in your Garmin fenix tracks. Use the advanced track editing tools in ExpertGPS to correct spikes and blips caused by intermittent GPS multipath errors. You can even select an entire segment of your GPS track and drag it right back to its correct location on the map!

Tracklog Specifications for your Garmin fenix


Geotagging Photos with your Garmin fenix

You can spend hundreds of dollars on dedicated camera hardware and cables to geotag your photos. Or, you can do it for free, using ExpertGPS. ExpertGPS automatically matches up the timestamps on your digital photos with the times recorded in your Garmin fenix track log. It just takes a few seconds when you get back to your desk to have ExpertGPS automatically geotag your photos.

Photos geotagged using ExpertGPS are %100 compatible with flickr.com, Google Earth, and any other geotagging software or Web site.

Still using paper forms, or typing data into your GPS piece-by-piece? With your digital camera around your neck, Garmin fenix in your backpack or in your vehicle, and ExpertGPS back at your desk, you can gather data on the move. There's no need to mark waypoints as you collect data - just snap photos at each site. ExpertGPS can create geo-referenced waypoints for your report from each photo you took along the way, and attach your photos to each waypoint it creates.

Need to convert NAD27 lat/lon to WGS84 UTM? ExpertGPS does it automatically. Enter coordinates in any format, in any datum. To convert Garmin fenix coordinates to any other format, just select that format in ExpertGPS. All of your data is automatically reprojected to the new format and datum.

ExpertGPS Pro lets you work with data in any US State Plane Coordinate System (SPCS). Even though your Garmin fenix doesn't natively support SPCS, you can use ExpertGPS Pro to convert data back and forth between state plane coordinates, lat/lon, and UTM.

Convert any address to latitude and longitude for your Garmin fenix

ExpertGPS converts addresses to GPS coordinates with its built-in address geocoder. Enter any address in the US (or in several dozen other countries) and ExpertGPS will bring up a map of that location and create a GPS waypoint you can send to your Garmin fenix.

With ExpertGPS, you'll be able to view all of your hiking trips over the aerial photos in Google Earth, showing exactly where you went. This feature is so popular in ExpertGPS, we've added a hot key (F7) that will automatically launch Google Earth and zoom in on your hiking waypoints and tracklogs. And, we've also added the ability to download KML files back to your Garmin fenix

ExpertGPS makes it easy to update your GIS database with GPS data recorded in the field. Simply mark waypoints or record a tracklog on your Garmin fenix, and then use ExpertGPS to upload your GPS data and export it as a shapefile. And you can Send GIS layers to your Garmin fenix as well.

ExpertGPS allows you to convert your fenix tracklogs and waypoints to AutoCAD's DXF format in two easy steps. Send AutoCAD DXF to your Garmin fenix

Download ExpertGPS
Download now and start your free trial of ExpertGPS 7.01
New features were added to ExpertGPS on January 6, 2020
ExpertGPS runs on Windows 10, 8.1, and 7.