The first step in working with or converting Ohio South FIPS 3402 state plane coordinates in ExpertGPS is to add the appropriate coordinate format and datum for your project. On the Edit menu in ExpertGPS, click Preferences. Click on the My Coordinate Formats tab, and click the Add Format button. 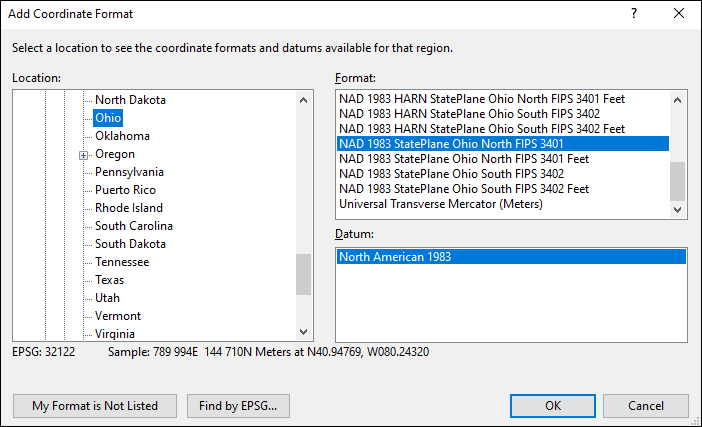 In the Add Coordinate Format dialog, change the Location, on the left side of the dialog, to World/North America/United States/Ohio. A list of all of the coordinate formats used in Ohio will appear in the Format pane in the upper right. Select Ohio South FIPS 3402, Meters, (or Feet, if you want to use US Survey Feet as the base unit). Now select NAD83 or NAD27 in the lower right pane, labelled Datum. (Note: WGS84 is identical to NAD83 in Ohio, so select the NAD 83 datum if you are trying to convert from WGS84 state plane coordinates.)

You can use ExpertGPS Pro as a Ohio state plane to UTM converter. Here's how to convert Ohio South coordinates to UTM:
First, add the OH South SPCS, as described above.
Enter your data in Ohio South, paste it in from Excel, or import a shapefile or CAD drawing by clicking Import on the File menu. ExpertGPS Pro will convert your state plane coordinates and display them over a topo map or aerial photo of Ohio.
Now add the UTM coordinate format and datum of your choice by returning to the Add Coordinate Format dialog. When you select UTM in the My Coordinate Formats list, all of your data will instantly be reprojected from Ohio state plane to UTM.
You can now export the reprojected UTM data by clicking Export on the File menu, or copy and paste into a spreadsheet.

How to Convert Ohio State Plane Coordinates to Lat / Long

Follow the instructions above, but instead of choosing UTM as your output format, choose one of ExpertGPS Pro's latitude and longitude formats. ExpertGPS can convert your Ohio South coordinates to lat-lon in decimal degrees, degrees and minutes (deg min.min), or degrees, minutes, and seconds (DMS).

Sending Ohio South coordinates to your Garmin or Magellan GPS

Your GPS receiver can't display your location using the US state plane coordinate system, but you can use ExpertGPS Pro to send X,Y points or polyline data from your GIS or CAD software to your GPS receiver. Import or enter your data as described above. There's no need to select an output format like UTM or lat/long, unless you want ExpertGPS to display the same values that will be displayed on your GPS. Just click Send to GPS on the GPS menu. ExpertGPS will reproject the Eastings and Northings in your Ohio South coordinates into the native format used by your GPS receiver, and upload them directly to the GPS. Now you can view all of your GIS or CAD data in the field on any Garmin, Magellan, Lowrance, or Eagle GPS!

Using ExpertGPS as a UTM to Ohio South Converter

Add the UTM coordinate format to ExpertGPS, and then import or enter your UTM data. To convert UTM to state plane, add and select the Ohio SPCS, as described above, and your UTM Northings and Eastings will be converted to state plane coordinates.

Use the technique above to convert latitude and longitude data to Ohio Northings and Eastings. To convert Garmin, Magellan, or Lowrance GPS waypoints or tracks to Ohio South state plane is even easier - just click Receive from GPS. ExpertGPS Pro automatically reprojects your GPS data into whatever coordinate format you select: Ohio state plane, UTM, or lat/long. You can then export your reprojected data into a GIS in shapefile format, export a DXF for your CAD software, or copy and paste into Excel or a CSV file.

How to Display Ohio South Coordinates on your GPS

Most handheld GPS receivers can't display Ohio state plane coordinates natively. But if you've got an older Magellan GPS receiver that allows you to set up a User Grid (check your GPS manual for compatibility), you can use the settings for the Ohio South Transverse Mercator projection listed below to trick your GPS into displaying Ohio coordinates in meters. On Magellan GPS receivers, go to the SETUP screen, and then click COORD SYSTEM, PRIMARY, USER GRID. If you want to use US Survey Feet instead of Meters, click UNITS TO METERS CONV and enter 0.30480061.

ExpertGPS makes it easy to convert coordinates to and from lat/lon, UTM, Ohio South, and other Ohio state plane coordinate formats. In addition to batch coordinate conversion, ExpertGPS Pro is the perfect tool for combining data from your handheld GPS receiver with your GIS and CAD layers. Visualize all of your data over USGS topo maps, aerial photos, and your own site maps. Download your free trial of ExpertGPS Pro now!