When deer season opened in Missouri, Kirk Kitchens was ready - with a prime hunting spot he'd scouted using ExpertGPS from his home computer back in Mississippi!


Kirk harvested a monster buck - on land he'd never set foot on before.

Learn how he did it below!


Every year ExpertGPS users send in photos of their successful harvests, trophy bucks and gobblers taken during the opening hours of hunting season. Using ExpertGPS in the off-season, they've pored over topo maps and aerial photos of their hunting leases and Game Management Areas, identifying ridges, drainages, and natural funnels. They've thoroughly scouted promising areas, marking potential tree stand and game camera locations as waypoints to send to their Garmin or Lowrance GPS receivers. They've printed maps to take with them on scouting trips, and they make the most of their time in the field by marking or photographing rub lines, scrapes, food plots and bedding areas. Back home, ExpertGPS automatically puts their waypoints and photos right on the map for instant reference. When opening day finally rolls around, they know the woods better than the deer do.

Kirk Kitchens shares the secrets of his deer hunting success 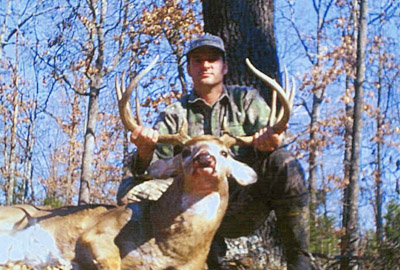 I use ExpertGPS for everything from vacationing in NYC to geocaching, and even in my business for job locations, but trophy deer hunting is the number one use.


ExpertGPS allows me to scout hunting spots from the comfort of my home, and around my busy schedule. It literally saves me hundreds of hours of walking and looking to find good hunting locations.


Opening morning of the 2001 Missouri deer season found me walking to a hunting spot that I had never stepped foot on, but had scouted extensively. Two hours later I was looking at the buck of my dreams. I harvested this massive 24" 10 point, and I feel that I owe a large part of my success to Dan and the guys at ExpertGPS.


Here is how I hunt with ExpertGPS:


The good thing about this technique, is that it doesn't matter if you're scouting your home town, or five states away. You'll have the confidence of knowing that you're hunting a good spot.


To Dan and the guys at ExpertGPS - Thanks and keep up the good work.